The results provided below are based on a client who after a year of SEO became disenchanted with the impact of SEO and decided to no longer invest SEO for his website.  Now that is not something that you expect to read on the website of an SEO business!  The situation was that while SEO had been effective (as shown below) the results in terms of improved rankings and hence website traffic were not as rapid as the client desired.  The reason for this was that his business was in a highly competitive market. A highly competitive market in SEO terms means that other businesses in his industry had invested previously and currently on SEO making it a tough market to rank in.

In cases like this with highly competitive markets, it is just a matter of a higher upfront investment in SEO in terms of the fact that SEO may needed to be done for at even as much as 2 years to achieve 1st page ranking.  However during this time website traffic does increase through ranking of less major keywords, it is just achieving ranking for the larger most competitive keywords that will take some time.

I always track several hundred keywords for each client which includes their major targeted keywords as well as keywords with smaller search volumes.  These are known as long tail keywords and are often less competitive and hence ranking is often achieved easier for these keywords than the major keywords which have the highest search volumes.

Whilst long tail keywords have only small search volumes together if ranking is achieved this can lead to a substantial increase in website traffic.  Say your major keyword has 600 searches a month in Google, 30 long term keywords with a search volume of 20 a month should provide the same (more likely greater) website traffic than ranking for the major keywords.  This is really a topic for another blog.  Back to the impact of stopping SEO.

Impact on Rankings when SEO Stopped

To demonstrate the impact of stopping SEO in terms of ranking performance I have provided three different measures below.

This first measure is purely just the number of keywords that dropped in ranking after SEO was terminated. 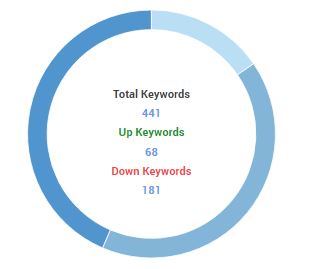 The circle to the left shows that out of the 441 keywords that I was tracking for this client 181 keywords had fallen six months after my SEO services had been terminated.

As with all websites there was also an improvement in rankings.

Since the last SEO work was done 6 months previously the website did in fact have 68 keywords that improved in rankings.  However the overall result is very clear, a drop in 181 keywords, against an improvement of 68.

Thus the stopping of SEO meant that there was a really large number of keywords that dropped ranking.

Impact of SEO in Terms of Number of Ranking Places

This second measure is a bit more accurate in that it provides the actual number of ranking positions that were lost after SEO was stopped.

This is the most accurate representation of the SEO impact when SEO is stopped.

The table above illustrates that six months after the SEO was halted there as a fall in 25,590 searches.  In contrast over the same period there were 7,190 improvements in search volume rankings.

The outcome is however that due to stopping SEO the website rankings which fell resulted in a total number of 18,400 searches that were now ranking lower.  A massive decline.

Impact in Terms of Search Volume Falls by Page

Lost search volumes overall for page one through to page five has been 4,808 searches, a huge amount.  This decline will continue unless SEO is started once again.

The impact of SEO can clearly be seen by this case study in terms of the rankings achieved and then the rankings lost once SEO is stopped.  Unfortunately for those businesses in highly competitive search engine searches a longer time frame is required to achieve rankings, and hence a higher investment in SEO required.

We can also see from the case study above that the investment made in SEO in terms of money spent is lost if SEO is stopped.  So when deciding in SEO the decision must be made knowing that it is a long term investment.  Whilst the impact of SEO for this business was indeed positive as illustrated by ranking improvements and also website traffic, the improvements were slow and difficult to achieve.  In less competitive markets the results can on occasion be extraordinary in terms of quick results but generally you should expect to invest for at least one year of SEO, possibly two to just achieve rankings and then there is also a smaller investment needed to maintain those rankings.

It is not to say however that the impact of SEO will only result in one or two years.  As seen from this case study website traffic increased substantially due to SEO.  However in this case the increase in traffic was just not considered sufficient by this client which is understandable as his industry is probably one of the most competitive of all my clients.

My name is Karen Thorogood; I am an independent SEO Consultant that specialises in SEO for geographically based, primarily service businesses in Australia that are built in WordPress.  I offer very reasonable SEO packages as I know that for many small to medium businesses that are still growing SEO is just an additional expense – and an expensive that has a lot of delayed return.  However SEO is very powerful and these days ranking in Google is a must for new businesses.  Older business can sometimes rely on the customer base that has already been established.  New business however to be successful at this time of high technology use, ranking in the major search engines can make or break a business. 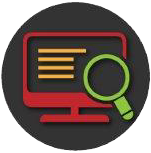